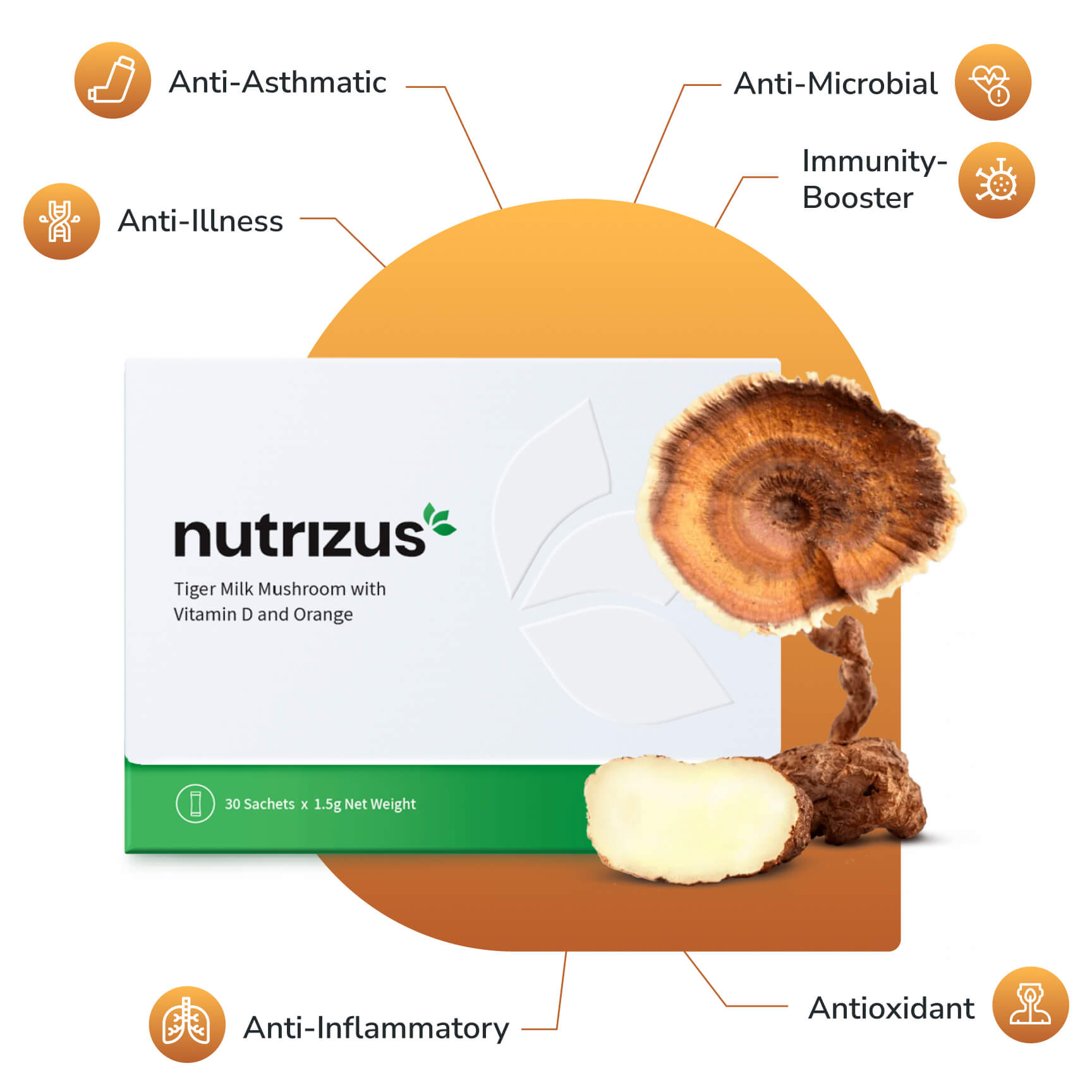 The medical benefits of Lignosus is not without proof. In fact, it’s been clinically tested for 6 respiratory healing properties.

This mushroom is said to be Anti-Asthmatic, Anti-Inflammatory, Antioxidant, Anti-Illness, Anti-Microbial, and helps to boost immunity. Traditionally, it’s been used as a tonic to treat more than 15 medical illnesses. Some of these ailments include asthma, bronchitis, COPD, cough, inflammatory diseases, and sinus.

Rich in antioxidants, Lignosus helps to fight free radicals in the body and repairs cellular damage in the respiratory systems. That’s why we cultivated and produced Nutrizus™ Tiger Milk Mushroom for anyone who suffers from any form of respiratory ailment.

Our Nutrizus™ Tiger Milk Mushroom helps to relieve cough and phlegm by soothing your throat. It also helps to enhance your airway muscle and improves your breathing. It also helps to strengthen your lung functions, supports bronchial health and protects you against lung inflammation.

Lung inflammation and inflamed mucus are one of the key causes of poor respiratory health. With Lignosus, it helps to promote proper mucus production and avoid overproduction which causes irritation. With reduced inflammation in your airways and a more relaxed airway muscle, you’ll start to experience ease in breathing.

Lignosus’ anti-inflammatory properties help to relieve asthmatic symptoms, strengthen your immunity, and fight against germs that cause allergies. Other benefits of Tiger Milk Mushroom also include the prevention of sinus inflammation.

If you suffer from smoker’s cough, Lignosus can also help you with improved bronchial health. It improves your lung functions to fight against inhaled smoke and reduces cough and lung infections. That said, quitting smoking is still the best solution against long-term damage to your lungs.

The table below will give you an overview on Lignosus’ health benefits:

How does Lignosus Help with Respiratory Health?

Lignosus improves respiratory health by reducing inflammation in your lungs and airways. Through detoxifying your respiratory system and soothing inflamed mucous membranes, you will experience increased ease in breathing.

By strengthening your immunity system against viral and microbial infections, Lignosus helps to detoxify your respiratory system. It removes impurities from inflamed cells and provides protection to your overall respiratory system.

In short, Lignosus helps to

There are no known side effects or major symptoms associated with consuming Lignosus. In both vivo and vitro models, Tiger Milk Mushroom have shown to produce beneficial effects.

In a study conducted to understand the effectiveness of Lignosus, 50 volunteers consumed the mushroom and general results show that they experienced improved health. Their respiratory and immunity health, as well as their antioxidant status, have benefited from consuming Lignosus.

Based on the study, it’s found that it’s normal to experience constipation and a slight increase in phlegm in the first few days. These are common symptoms of the body’s natural response in the process of detoxification.

However, if you continue to experience adverse side effects, please stop the consumption of Lignosus and seek medical advice immediately.

Asthma is common among children and in some cases, a long-term illness that follows them into adulthood. It is a chronic disease that causes inflammation in the airways, resulting in wheezing, coughing, and shortness of breath.

Those suffering from asthma attacks face breathing difficulties as the inflammation causes small airways in the lungs to narrow. This could also result in chest tightness and cause panic among those who suffer from attacks.

Lignosus helps with asthma due to its anti-inflammatory properties. It supports the body by reducing inflammation of the airways and relaxing the airway muscles, which promotes easy breathing.

Unlike other medicines, Lignosus is completely natural solution to promote improved respiratory health. It contains polysaccharides that are known for their immunoregulatory properties that help to improve the recovery systems for respiratory allergies.

To get into the specifics, here’s the appropriate dosage recommended for Lignosus:

Lignosus was first used as a medicine in 1664. It was recorded as “Lac tygridis” (or Tiger’s milk) in The Diary of John Evelyn and was  given by Jesuits of Japan and China to their Order at Paris as repository’s collection. In 1879, MC Cooke first recorded Polyporus rhinoceros using a specimen from Penang Islan, Malaysia. Later, in 1890 Sir Henry Nicholas Ridley, the founder of Malaysian rubber industry, attempted to cultivate Tiger Milk Mushroom. After a series of studies, Tiger Milk Mushroom was listed as a mushroom with important economic value in A Dictionary of the Economic Products of the Malay Peninsula in 1966. Fast forward to 2002, the Former Prime Minister of Malaysia, Tun Dr Mahatir Mohamad mentioned the Tiger Milk at the International Biotechnology Convention.

The Lignosus is native to tropical forests in Southeast Asia and harvested in Malaysia, Thailand, Indonesia, the Philippines, Papua New Guinea, as well as southern China. Its common name, Tiger Milk Mushroom, is derived from traditional folklore. The lore states that the Lignosus grows whenever a drop of a tigress’ milk falls to the ground, hence the name, Tiger Milk Mushroom.

Rare and Hard to Find

Lignosus is rare and unlike most mushroom species, it doesn’t grow in clusters. Instead, it grows in isolation and you can only find one stalk at a time. Additionally, it’s unlikely to find another Lignosus within a 5km radius.

On top of that, those that have sprouted from the ground produce a stem and cap. These types of Lignosus are not useful as the medicinal properties of Tiger Milk Mushroom are only found in the underground tuber or sclerotium. Gathering these mushrooms is a challenge and is usually left to the orang asli.

To ensure that we continue to harvest the medicinal properties of Tiger Milk Mushroom, the team at  Nutrizus™ has decided to cultivate our own mushrooms to meet the needs of our modern consumers.

A study in 2019 was conducted on 100 participants with asthma-related issues. The study has found that 75% of the participants experienced an effective alleviation of persistent coughs, sinuses, and joint pains.

Some participants reported that Tiger Milk Mushroom helped to relieve cough and made them feel more energised and less lethargic. Due to an overall improvement in their immune system, participants also claimed that they fell ill less frequently. Some asthmatic participants felt that they became less dependent on inhalers. 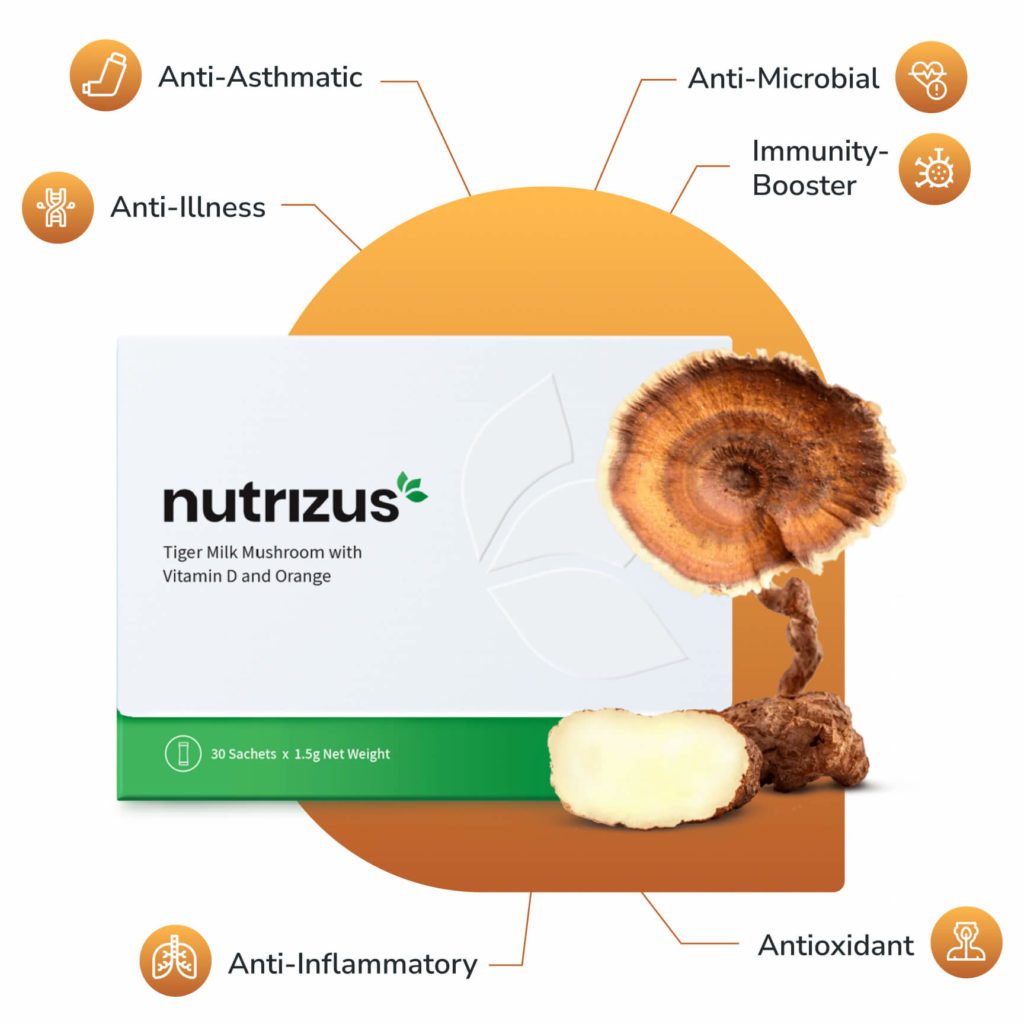 The medicinal mushroom has a total of 6 clinically proven health benefits. It is anti-inflammatory, anti-asthmatic, anti-illness, anti-microbial, antioxidant and immunity-booster.

Here is how Lignosus helps to strengthen and protect the respiratory system: 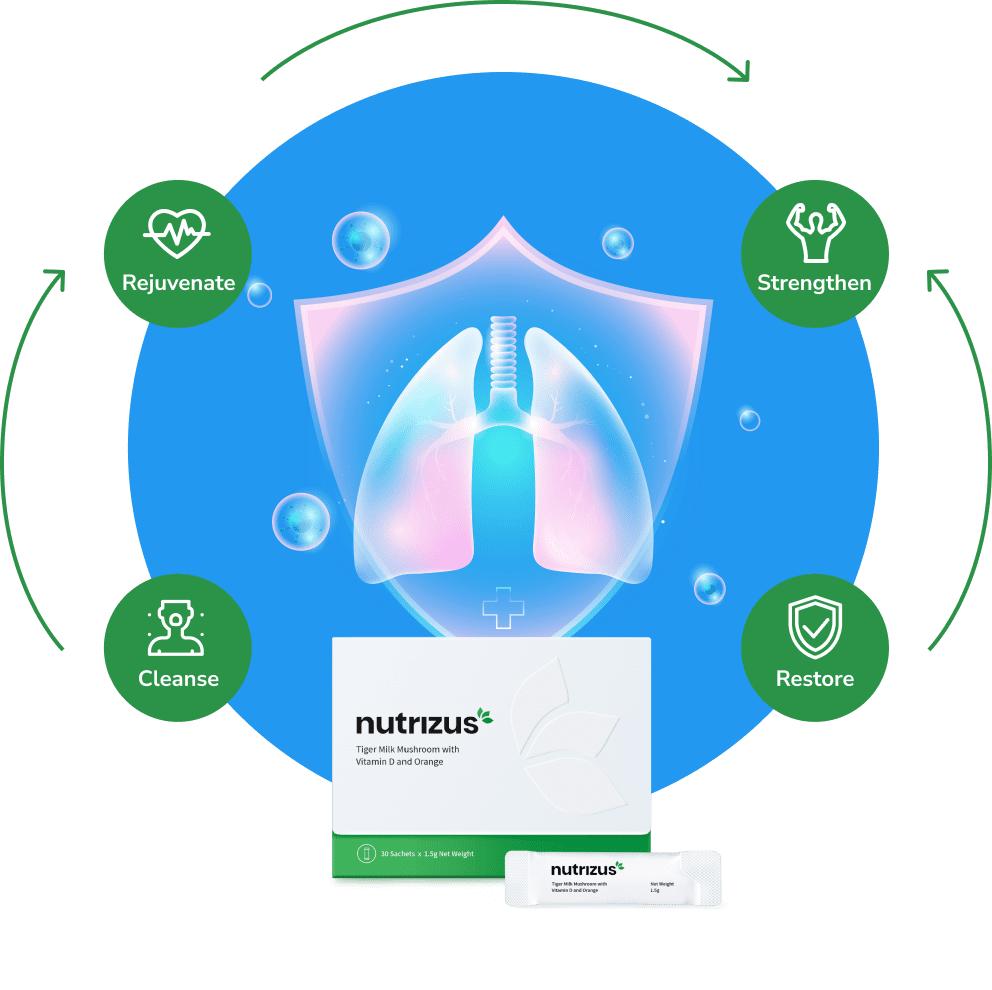 Our product can help to relieve lung and respiratory problems. Through cleansing impurities, promoting rejuvenation and improving immunity, you will get to enjoy overall improved health. Additionally, your respiratory system will enjoy better protection through organic and natural ingredients.

Step 2:
Restore After cleansing all impurities, it soothes inflamed mucous membranes in the respiratory tract and promotes cellular rejuvenation

Step 3:
Strengthen It also enhances and promotes a balanced immune response to environmental triggers in the lungs.

Step 4:
Protect Tiger Milk Mushroom also helps nourish your lungs and airways for respiratory health, as well as protect them from injury.

Discover how others have benefited from Nutrizus™ Tiger Milk Mushroom

Mycelium refers to the seed of Lignosus and they are harvested between 7 – 14 days. As for Sclerotia, harvest times will take longer, usually around 6 months.

You can buy Lignosus (Tiger Mulk Mushroom) here at nutrizus.com.

Our product is currently still not available on Lignosus UK Boots, Lignosus Amazon, Lignosus holland and barrett, Lignosus CVS yet.

Can we consume Lignosus directly?

Please note that Lignosus needs to be commercially cultivated for reproduction and cannot be bought directly for consumption. To ensure that you get the safest form of Lignosus, we encourage you to buy supplements from retailers like us.

Our Nutrizus™ Tiger Milk Mushroom is cultivated in a stable strain of Lignosus rhinocerus (NB08) indoors under a controlled environment. It is also produced using food-based nutrients instead of soil or chemical substances.

We do not use pesticides, fertilizers and other chemical additives and all our Tiger Milk Mushroom is free from heavy metals, alpha-toxin and microbial contamination.

†DISCLAIMER: These statements have not been evaluated by the Food and Drug Administration (FDA). Individual results may vary.

Currently, we are not available at UK Boots yet.

Currently, we are not available at Amazon yet.

Currently, we are not available at Holland and Barret yet.

Currently, we are not available at CVS yet.

Our vision is to help 1 million people strengthen their respiratory systems and create a better life for them.

†Disclaimer: The above statements have not been evaluated by the FDA (Food and Drug Administration). Our products are not designed to diagnose, treat, cure or prevent any medical condition or disease. The final results are not guaranteed, it could or may vary from one person to another person entirely based on their conditions or any other factors that may determine it. Please take note on the statements, results, and views expressed by Nutrizus are not formal and official medical advice. Kindly consult your doctor if you are suitable to take our products. We will provide any refund if you are not satisfied with our products.