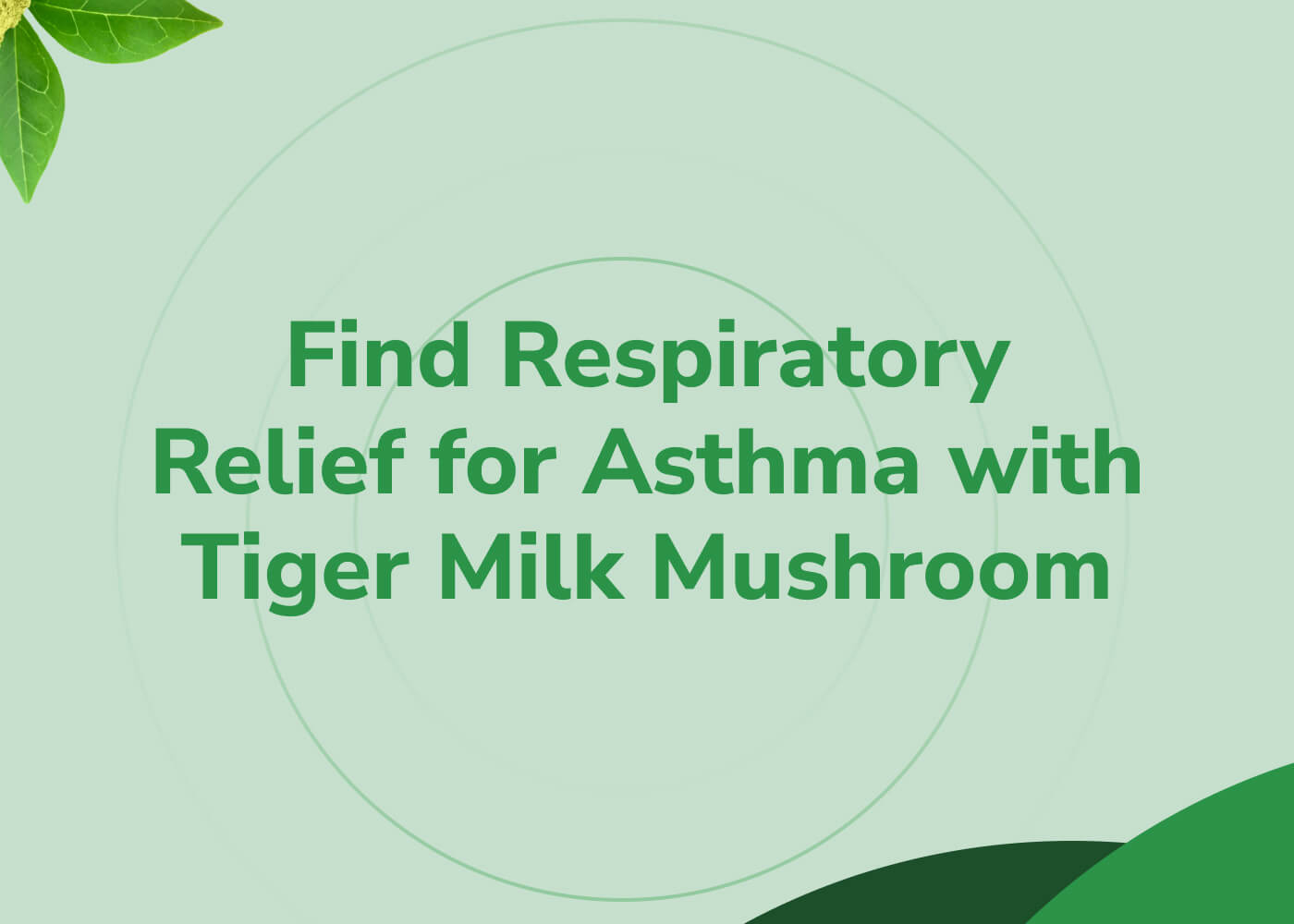 Are you familiar with the warnings about wild mushrooms? While various types of fungi are edible, many can be poisonous to consume.

However, there are also strains of wild mushrooms that can be extremely beneficial to human health. Tiger Milk Mushroom is one of them.

Where Can You Find Tiger Milk Mushrooms?

Tiger Milk Mushroom grows in tropical forests across Southeast Asia. It’s believed that they’re found in areas where a tigress has spilled milk while feeding her cubs, hence its memorable name.

This mushroom is prized for its rarity and high medicinal value, and is widely used as a health tonic in Indonesia, Malaysia, Singapore, Thailand, the Philippines and China.

Back in the 1950s and 60s, many Chinese families relied on Tiger Milk Mushroom to treat coughs, colds and asthma. Malay communities used it as a natural remedy for cancers of the breast, lung and liver.

The History of Tiger Milk Mushroom

In the Colonial Era

Tiger Milk Mushroom, scientifically known as Lignosus rhinocerotis (Cooke) Ryvarden, boasts a 400-year history of treating various ailments. It was a staple ingredient in medicines among the indigenous peoples of Southeast Asia.

The earliest record of Tiger Milk Mushroom dates back to the diary of John Evelyn, published in 1664. A government agent from Europe, Evelyn first encountered the mushroom on his trip to Southeast Asia. He observed how the locals used Tiger Milk Mushroom to remedy diseases which European doctors at the time considered untreatable.

Following this, MC Cooke became the first person to document the fungus scientifically. He studied a specimen native to Penang, Malaysia, which he then named Fomes Rhinocerotis. In 1890, Sir Nicholas Ridley—the pioneer of the Malaysian rubber industry—attempted to cultivate Tiger Milk Mushroom himself, but ultimately failed.

Nearly a century later, Tiger Milk Mushroom was featured in the 1966 book “A Dictionary of the Economic Products of the Malay Peninsula”. Here, it was named as a product with vital economic value.

Did you know that the former Malaysian Prime Minister has also praised the healing properties of Tiger Milk Mushroom? At the 2002 Convention on Biotechnology in Kuala Lumpur, Tun Dr. Mahathir Mohamad claimed to have relieved his chronic cough by taking Chinese medicine made with Tiger Milk Mushroom.

In 2016, Dr. Leo Teik Kee successfully developed a method for the commercial cultivation of Tiger Milk Mushroom. This led to the wider use of the mushroom as an ingredient in medicines and supplements across the region.

Asthma is a chronic respiratory disease that affects over 260 million people around the world. This condition causes air passages in the lungs to become inflamed and narrow, resulting in wheezing, coughing, difficulty breathing and tightness in the chest.

Many people have different triggers for their asthma condition. These can include existing allergies, dust, fumes, air pollutants and even certain soaps or perfumes.

Asthma patients experience a lot of discomfort and tiredness resulting from their attacks. Even mild cases can significantly affect their overall quality of life.

Tiger Milk Mushroom improves respiratory health thanks to its anti-inflammatory properties. This means that it can reduce inflammation of the lungs and airways, making it much easier to breathe. It can also help relieve inflamed mucous membranes. Since inflammation of the airways is the primary cause of asthma, Tiger Milk Mushroom is valuable in helping you manage symptoms.

Crucially, Tiger Milk Mushroom also contains high levels of (1,3)-(1,6)- Beta-D-Glucan. This is an immunoregulatory agent which can speed up your recovery after an asthma attack. With Tiger Milk Mushroom, you can regain your strength quickly and reduce any lingering discomfort.

Aside from detoxifying your respiratory system, Tiger Milk Mushroom has a high antioxidant content to help neutralise the harmful free radicals in your body. Antioxidants can also improve eyesight, heart health and even prevent cancer.

Improve your asthma with Nutrizus™— learn more about our Tiger Milk Mushroom supplement and make your first order today!

Our vision is to help 1 million people strengthen their respiratory systems and create a better life for them.

†Disclaimer: The above statements have not been evaluated by the FDA (Food and Drug Administration). Our products are not designed to diagnose, treat, cure or prevent any medical condition or disease. The final results are not guaranteed, it could or may vary from one person to another person entirely based on their conditions or any other factors that may determine it. Please take note on the statements, results, and views expressed by Nutrizus are not formal and official medical advice. Kindly consult your doctor if you are suitable to take our products. We will provide any refund if you are not satisfied with our products.